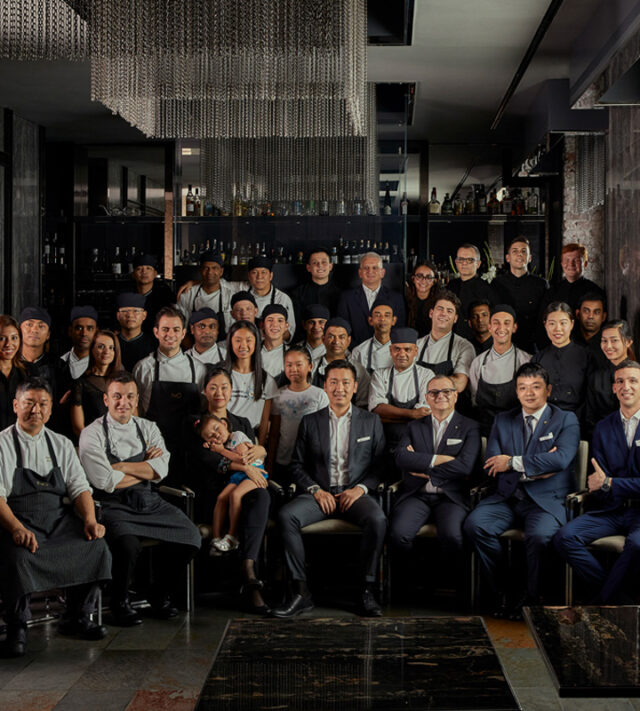 Born in 1982 in China, in the Zhejiang region of China, he spent his childhood in Correggio, in the Italian region of Emilia. At 18 he moved to Milan and started to work, alongside his father Xue Zhen, in the restaurant Acquario. Deep down he started to develop an almost religious admiration for Japanese cuisine and its traditional cult for high-quality ingredients. In 2007, at the age of 24, Claudio opened IYO Experience, the first Japanese restaurant to be awarded a Michelin star in Italy. But the dream wasn’t over yet, in 2019 he opened the gourmet restaurant AALTO – part of IYO and the sushi counter IYO Omakase, in the heart of the Porta Nuova area. Most of all, three concepts drive him: commitment, passion and determination.

Masashi was born in Tokyo in 1976 and began working from an early age in restaurants in the Yamanashi Prefecture. During the day as a kitchen boy he spied on the skilful work of the sushi masters; and in the evening he would replicate the same movements with the fish he had bought at the market. In 2001 he moved to Milan where he worked at the sushi counters of restaurants such as Endo, Sol Levante and Osaka, which are among the finest examples of Japanese cuisine in Italy. In 2018, he became part of Claudio Liu’s team. A tireless workaholic, he never loses sight of his objective: to prepare the finest specialties where taste goes beyond beauty. Sushi chef of Edomae-zushi tradition, the oldest and strictest school, today he is both sushi master at IYO Omakase and supervisor for IYO Experience’s sushi counter.

Born in Pavia in 1972, Danilo has pursued a superb educational path: after obtaining a Diploma in hospitality in Stresa, he became AIS sommelier and, soon after, a sake sommelier. He was in charge of the restaurant, service and beverage at his own family business until he joined IYO Experience in 2015. Profoundly passionate about Burgundy, he travels there several times a year, returning each time with an ever-more comprehensive knowledge. With guests, he prefers dialogue to imposition, but if you say “you choose”, he will indulge in recommending many wonderful wine labels.

Born in Aosta in 1984, Nathalie moved to Milan to study Communication at IULM, University of Languages and Communication. After graduating, she chose to apply her newly-gained knowledge to the spheres of Food & Travel as well as Cultural Heritage. In 2018 she met Claudio Liu who radically threw her into fine dining. She was immediately intrigued by this world and applied her usual enthusiastic approach to this new role. Since 2019, she has overseen and coordinated all communication and PR activities of IYO Experience, AALTO – part of IYO and IYO Omakase. Meticulous and well organized, she never lets go until the results have been reached.

Any cookies that may not be particularly necessary for the website to function and is used specifically to collect user personal data via analytics, ads, other embedded contents are termed as non-necessary cookies. It is mandatory to procure user consent prior to running these cookies on your website.